CGTech’s VERICUT Force optimization software can drastically reduce cycle times from 20-70%, even on supposedly optimized programs from CAM systems. It varies the feed rate to keep chip thickness and cutter load constant, which can increase tool life by 100% or more.

In the past several years CAM technology has evolved to enable extremely productive new milling strategies. Perhaps chief among them is high efficiency machining which can reduce roughing cycle times by as much as 80% in some cases. Rather than traditional hogging, with this process you use a solid endmill with a much greater depth of cut, small stepovers and a high constant feed rate. The limitation, however, is that this strategy can only be used in certain circumstances within a given part program, with the bulk of the total cycle time often still devoted to more traditional cutting techniques.

CGTech has an answer for this with its post program optimization software that enhances the entire part program, including CAM optimized tool paths. Called VERICUT Force, the software works on the principle of maintaining a constant chip thickness and cutter load throughout each tool path and modulating the feed rate accordingly. In most circumstances this means feeding faster than originally programmed most of the time, and occasionally feeding slower in moments of high cutter engagement. The result is often an overall cycle time reduction of 25% or more, with substantially longer tool life and better surface finish as well. Here’s how it works.

When cutting at a constant feed rate programmers have little choice but to be conservative in the rates they choose because they have to anticipate and be sure cutting tools survive the worst cutting case conditions. For example, you can be cutting the wall of a pocket at a very high rate, but when the tool gets to a corner the cutter engagement can spike dramatically, causing shock and vibration, perhaps even breaking a tool. The corner is an obvious case, but there are often many other cutter engagement spikes in a typical part program, such as when the tool enters the material and other more subtle circumstances. CAM systems typically cannot anticipate these moments of varying cutter load so an overly conservative feed rate is selected to survive the predictable hostile cutting conditions, but also results in inefficient cutting in other areas that could and should have been machined with faster cutting speeds. 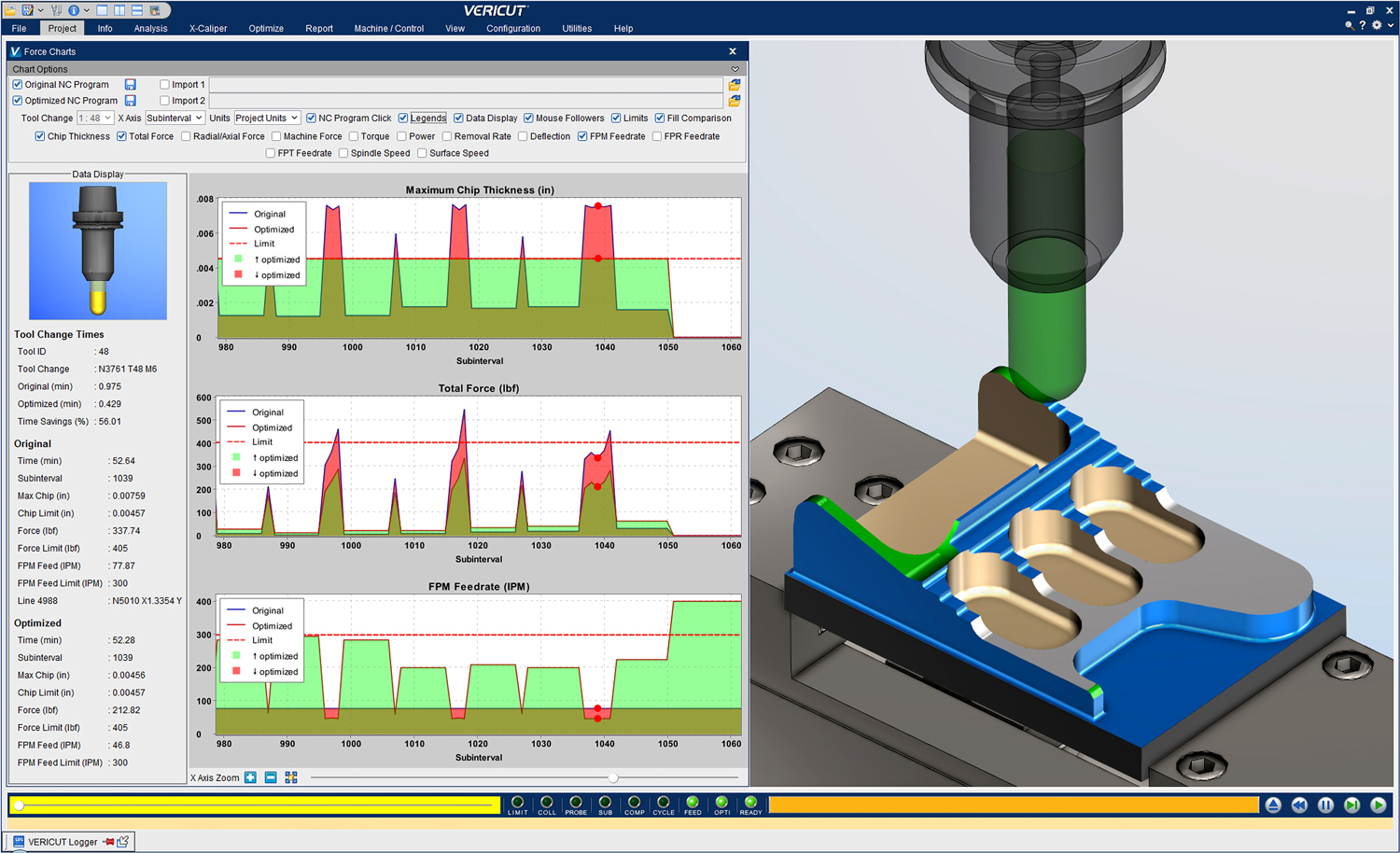 Force software works by analyzing chip thickness and cutter load, and then adjusts feed rate to maintain optimal yet safe cutting conditions for each cut, in each operation.

The key to Force is that it can determine chip thickness and cutter load under any cutting condition and most any material. This enables the software to dynamically compensate for cutter load variability by adjusting the feed rate up where you can machine faster, and down in the moments where cutter load exceeds the desired level.

The image above illustrates how it works on a typical part program. As you are viewing a simulation of a cutting routine you can see where the tool path is exceeding the maximum chip thickness (shown in red in the top graph) and placing excessive force on the cutter (middle graph). Those moments of course need to be corrected with a slower feed rate, but all the green areas in between are opportunities to machine significantly faster, as shown in the bottom graph.

With this methodology Force can further optimize existing CAM so-called “optimized” tool paths because most CAM systems can’t calculate a constant chip thickness based on cutter engagement in the stock workpiece and cutting forces, or dynamically modulate feed rate based on these critical variables. Force thus can further reduce existing HEM cutting times by as much as 20%. But the bigger payoff may well be that Force optimizes all cutting strategies based on chip thickness and cutter load, so it is applicable across virtually an entire part program and can be used on roughing, semi finishing and finishing cuts. It even works in turning applications.

This video shows a variety of examples of how effective Force is at reducing cutting times with different tools and materials.

Force was also applied to a previously optimized program. It cut an hour off a six-hour cycle time and caught and removed a tool loading spike that would almost certainly have broken the cutter. In general Force saved at least 17% on basic part geometries and 45% on complex geometries, and improved tool life significantly with little to no chipping or edge wear. Read more about Force at iMFLUX Inc.

How to Generate the Perfect Chip

This all begs the question of how does Force “know” what an optimal chip thickness should be for a given tool and material? It can do this in two ways.

Cutting Tool Manufacturer Data – Cutting tool manufacturers provide start data for their cutting tools which can be downloaded from the cloud with the tool geometry data via applications such as Machining Cloud, Coro Plus, TDM and others. By using the VERICUT Tool Import function cutting tools are imported with machining “intelligence” such as realistic cutting ranges for the type of material being machined, and reasonable starting values for optimization.

VERICUT Force optimization software can be used on turning processes as well.

This optimization process can have a dramatic impact on cutting tool related costs in several ways, and typically increases tool life by 100% or more.

This combination of faster AND safer cutting increases the useful life of your tools substantially, reducing tool costs and the costs associated with machine downtime and tool replacement.

This article was originally published on the Modern Machine Shop website.